On Day Two we were scheduled to visit Lerna, the Argos Museum and the Skouras Winery.  I’d heard of Lerna with respect to Mycenaean artifacts, but didn’t know anything about it other than the name.  Mythologically Lerna was the location of the Hydra who guarded one of the entrances to the underworld, slain by Heracles as the second of his labors.  Mysteries, sacred to Demeter, were celebrated there.

There are Neolithic and Bronze Age ruins at Lerna, notably the House of Tiles, an administrative center with a fortification wall.  It is a “corridor house,” with four central rooms sided by two corridors used for storage and to let on to stairways to the upper story.  It isn’t considered to be a domestic dwelling because there was no hearth, according to Sandy, and because it was left alone after destruction, except to raise a tumulus over it and sink shaft graves into it, which suggests it had some sort of sacred significance.

The House of Tiles in Lerna

It is thought to have some administrative function because of the number of stamp seals found here.

Diagram of the House of Tiles

The stamp seals used within the precinct were identical to those in central Anatolia.

Stamp Seal from Lerna — This one has a swastika in it

Interestingly, Sargon of Akkad in his Geography claimed “the Land Beyond the Land of Lead” to be his.  Sandy suggested that Lerna was in this Land Beyond.  I’ve tried to find more about this Geography of Sargon, but wasn’t able to substantiate the suggestion.

There are other buildings like the House of Tiles in Messenia and  Attica.  The House was burnt around 2600.  The Tumulus was created on top of it around 2000 and the shaft graves were sunk around 1500.  It’s hard to show how interesting this site is, because there are not poetic looking remains, but one of the interesting things was the juxtaposition of a house with a Megaron and Apsidal houses from the Middle Helladic Period.  An Apsidal House is one with a semicircular wall at one end.

A Megaron is a structure built around a Great Room, featuring a central hearth, a vented clerestory and colonnade.  It is the absolute hallmark of a Mycenaean building and all the great Myceanean fortresses feature a megaron in the main building.

Prior to the Myceanean Period (1600-1200 BC roughly), apsidal houses were the typical model and afterwards they continued so.  In fact Byzantine, Romanesque and Gothic churches all take their design from the Greek apsidal house. 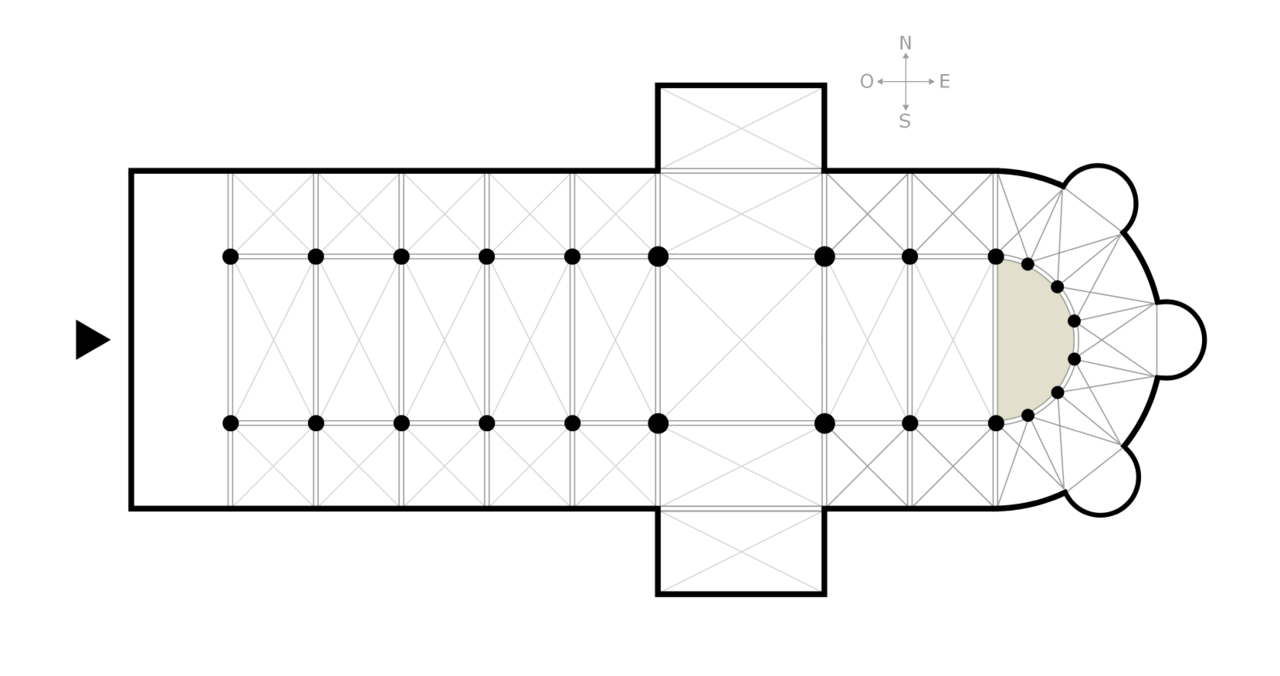 The basic configuration of a Cathedral

Yesterday, Sandy told us that Poseidon means “lord of the earth;” don or dan meaning earth in Indo-European.  In the Iliad, the Achaeans are called Argives and Danaans interchangeably.

According to Egyptian records, the Danaia became mercenaries for Thutmose III when the new political organization, the Mycenaean, rose at Lerna and elsewhere in the Argive plain around 1500.  The Greeks must have been astounded by the sophistication of the Egyptians and the Minoans of Crete.  Greek religious ideas were borrowed from Egypt: Makaretes, the land of the dead, and the idea of the Elysian Fields, to be specific.  (I have always found it notable that the shades of the dead in the Odyssey Book Eleven are unconscious and unable to speak until they have been given blood to drink, showing that an earlier Greek idea of the soul was not of a conscious one.)  These Danaia would have been Hellene.  The former population, called Pelasgian, were probably the same kin as the Cycladic islanders.

The Mycenaeans adopted sea-fairing from the Cyclades. There were large, coarse (only in comparison to the Minoan pithoi), ceramic jars half buried in the ground for storage.  Potteries of the bronze age world needed to be located near a source of water and a large supply of firewood.  They weren’t to be found just anywhere, so archaeologists can often trace ceramics to a certain pottery or workshop.  There are, of course, stylistic similarities to help identify them.  Potters, however, also traveled and made pithoi from local clays, but with Cycladic designs.  These very large jars were sent by ship all over the Mediterranean world.  On the Uluburun wreck, one large pithos was filled with small, fine ceramic vases, a trade item in themselves.

From Lerna, we drove to an ancient pyramid that has not been successfully dated.  It may have been a watch tower; it may have been meant for sacred activities.  It’s very odd, but apparently there were a number of them in Pausanias’ day.  A Second Century AD traveler and geographer, Pausanias was told, while traveling in Argos, that it was a memorial for Argive soldiers who died in war.  That is as good an explanation as any.  Apparently, Argos sort of declined during the Geometric (1050-700 BCE) and Archaic (800-480 BCE) periods, after having been quite important in the Mycenaean.  The Argives remained neutral in both the Persian and Peloponnesian Wars.

Anyway, the pyramid was made with large stones and was two stories high.  Whether it tapered to a peak or had any windows, it is impossible to tell.  The depressions for the second story floor joists are clearly visible inside, cut into the stone.

The building stones on the interior are large and square cut, but on the outside they are sheared off to create a smooth incline on the exterior side.  There is an imitation (?) Mycenaean triangle-topped doorway on one side of the Eastern face, set back by a foot or so from the rest of the wall.   It lets onto a corridor running along the Southern interior.  At the end of the corridor is a door to enter the one room interior opening on the North side end of the corridor.  If there was a closable door, it would have been utterly dark inside, without lamps, a good place for mysteries.  It was curious.  Sandy thinks it’s a piece of archaizing from the Geometric Period, but there’s no way of knowing for sure.  Other scholar think it is Mycenaean.

Lindsay and Leslie framed in the Pyramid’s doorway

Honestly, it would make the greatest fort!

After the Pyramid, stopped to look at some old trains while Miranda organized snacks to tide us through our next stop.

This Train Station and these tracks date from the modern beginning of the Greek Democracy, when Nauplion was the capital.

Sandy with his constant companion, Pausanias, in his hand

Sandy, Leslie and Richard I entering the Theatre of Argos

After lunch we visited the Greek Theater in Argos.  It was built to accommodate 20,000.  There was a Roman schema added in front, providing a floodable, sealed semi-circle that could accommodate mock sea battles.  Sandy stood on the speaker’s stone and read from Pausanias.  Pausanias mentioned a famous woman poet named Telesilla, whom I’ve looked up.  She’d make a great protagonist in a novel (which I of course should write…..).

She was considered to be one of the nine, great, female Lyric poets of Greece and was responsible for a metrical innovation that was named after he.  As a child, she was sickly, so she went to the Pythia to consult about her health. Pythia told her to “serve the Muses” – that would be a great motto on a family crest — and Telesilla devoted herself to poetry.  When Cleomenes, the King of Sparta, invaded the land of the Argives in 510 BC, he defeated and killed all the hoplites of Argos in the Battle of Sepeia and massacred the survivors. Thus when Cleomenes led his troops to Argos there were no warriors left to defend it.  According to Pausanias, Telesilla stationed on the wall all the slaves and all the males normally exempt from military service owing to their youth or old age. Also, she collected the arms from sanctuaries and homes, armed the women and put them in battle position.   When the Spartans appeared, they made a battle cry to scare Telesilla and the other women, but Telesilla’s army didn’t scare, stood their ground and fought valiantly. The Lacedaemonians, realizing that to destroy the women would be an invidious success while defeat would mean a shameful disaster, left the city.  Would this make a good movie, or what!

According to Pausanias at Argos there was a statue in front of the temple of Aphrodite dedicated to Telesilla. The statues depicted a woman who holds in her hand a helmet, which she is looking at and is about to place on her head and books lying at her feet (although it would equally represent Aphrodite, in her character as wife of Ares and a warlike goddess  — the books, however, seem out of place).[ The festival Hybristica or Endymatia, in which men and women exchanged clothes, also celebrated the heroism of her female compatriots.

We’d had only snacks thus far that day, because we were going to the Skouras Winery for a tour and tasting and lunch as well.  Our guide was thin as a rake, had long bushy hair contained in a ponytail and was a total showman; we all thought him over the top, but engagingly so.  It called forth a response and we needed to play along.

He proudly described their latest prize winner.  We tasted two whites and two reds.  I wanted to buy the best red and have it shipped to my friend, Andrea, as a surprise, but the showman discouraged me, saying it would be too expensive — this actually turned out to be true, as I found out when I left a new and unused hair dryer at the hotel and it would have cost $140 to send to the USA.  Now that’s inflation! —  so I bought a bottle to drink and share on the trip.  I knew Olivier was going to show us his video of the Santorini and Crete Tour, so I thought I’d offer it as refreshment when we did that.

That night after dinner, we eschewed the nightcap and headed back to the hotel so I could type up some notes before I forgot them and to go to bed early.  I wrote a long entry about Lerna and Epidauros as an e-mail to myself, but when I went to send it, my “session had timed out” and it disappeared.  I was so annoyed.  After that, however, whenever I wanted to send myself a message about what we’d done that day, I sent notes in shorter installments.  I must say, apart from that experience, I did love having an iPad with a keyboard along with me on the trip.